Behind the Scenes...
At Home With Jim and Sally Burke (below)

Meet Spencer Shea
2020 has been an eventful year

Like a rock: Jim Cole keeps the fire company history running
Jim says, "It's a passion of love."

At Home With… Jim and Sally Burke

At age 87, with either five or seven heart attacks – he’s lost track by now – along with a handful of stents, a pacemaker and an assortment of other cardiological aids to keep him going, pioneer Cranberry firefighter Jim Burke knows he’s lucky to still be around.

As the Township’s first fire chief, Burke clearly recalls the 1959 startup of the Township’s volunteer fire company. He can still rattle off the names of all the other men who helped to hand-build its first fire station, overhaul its 30-year old fire truck, conduct carnivals to raise a few operating dollars and then join him in responding to the occasional barn and field fires which occurred in the farm community that was then Cranberry Township.

But the other men are gone now, as is the rural character of the settlement into which he and Sally – his high school sweetheart – moved more than 60 years ago. Sally recalls that in 1957, as they were looking to buy the house located on what was then an unpaved Peters Road, her father eyed the then-seven-year old bungalow, telling the young couple it would make a good stepping-stone.

But the Burkes – who raised their three children there – fell in love with the house as well as with the community, never seeing the need to step into anything different. 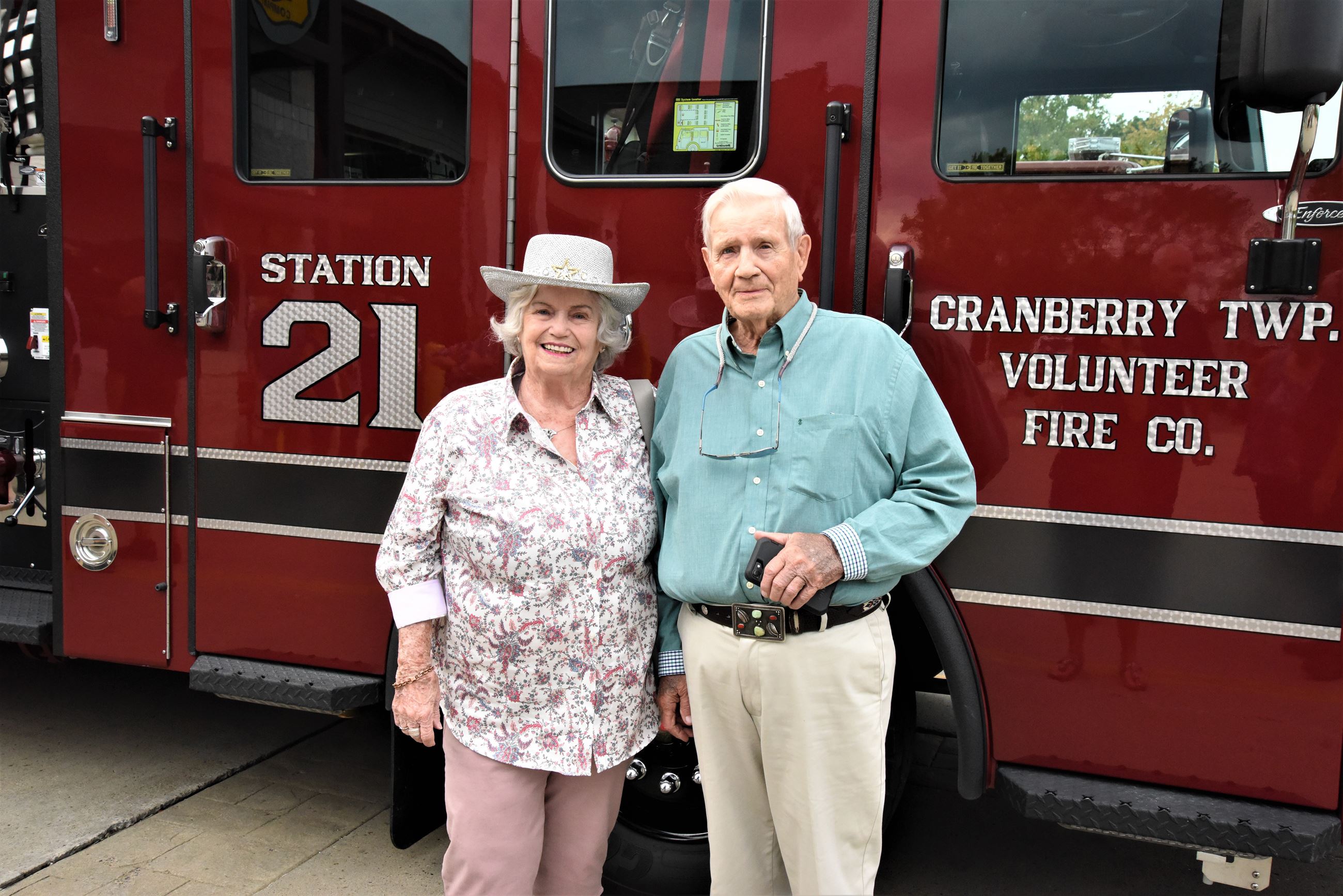 Sally, who had studied and produced art from childhood, created many of the watercolors that grace the couple’s walls and stand framed in stacks along the hallway and in the spacious music room of their home, where Jim still plays his Hammond organ every day.

Years earlier, Sally put her artistic talents to use in support of the fledgling fire company. She designed a velvet Santa Claus doll which the Women’s Auxiliary mass-produced and sold. The proceeds – about $400 – were instrumental in buying garage doors for the newly built fire station. That station – now home to a beer distributor on Dutilh Road – had been a work of love.

Nearby businesses also helped, including Frankenstein Concrete and Mashuda Excavation. It was a totally bootstrapped enterprise and, at least in the early years, the Township contributed nothing. Later, when one of the volunteers was elected to the Board of Supervisors, that began to change.

Now, the Burkes enjoy their leisure, and the fire company has been passed on to different hands. Since Jim’s retirement, the couple have become snowbirds and now enjoy their winters in a 55-plus community in Vero Beach. However, their hearts remain in Cranberry, where their pioneering efforts have left a lasting a legacy for the entire community.

“It’s really amazing to make something out of nothing,” Sally said. “But we certainly did.”